You are here: Home / The Sixth Annual Afterlife Conference

A Personal Message From Bob Olson about The Afterlife Conference

Last year Afterlife TV was a sponsor for the conference, and my wife, Melissa, attended with her mother. Melissa’s father died that year, so it was a meaningful event for them both. Melissa came home telling me about the many people she spoke with at the conference who shared how they were significantly changed for the better by attending. Some folks told her it was their second time because they gained so much value the first time around.

I think that the speakers and their expertise speak for themselves, and that is reason alone to attend. But one major value of conferences like these that often goes unnoticed is how powerful it is to be around other like-minded people — people who are interested in the afterlife, people who are grieving the loss of a loved one, and people who believe that awareness and growth are as important as exercise and nutrition. If this type of camaraderie is something that touches your soul, I highly recommend the original Afterlife Conference, which Afterlife TV is sponsoring again this year. 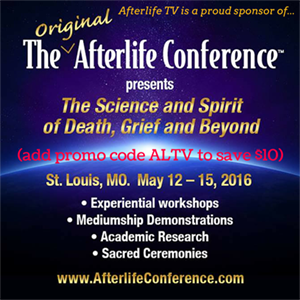 Register for the Afterlife Conference at  http:/www.AfterlifeConference.com
and use the promo code ALTV to get $10 off general admission.

Get my new video notices! I'll only email when I add a video.

Bob Olson is the host of Afterlife TV and the author of Answers About The Afterlife. Afterlife TV is the most recent of Bob's resources to guide and educate you about life after death. Here you'll see episodes where Bob interviews authors, experts & practitioners (Interviews), episodes of Bob sharing what he's learned from his investigations (Reports), and episodes of Bob interviewing people about their extraordinary afterlife-related experiences.

A former private investigator, Bob Olson has been an Afterlife Investigator & Psychic Medium Researcher since 1999. In his search for evidence of life after death, Bob has tested hundreds of psychic mediums and other afterlife-related practitioners to weed out the legitimate from the phonies, frauds and scam artists. [Read More …]